The Everett Files: Take You To Hell by T.J. Spade Blog Tour

Take You To Hell

Take You To Hell: Book Two of the Everett Files 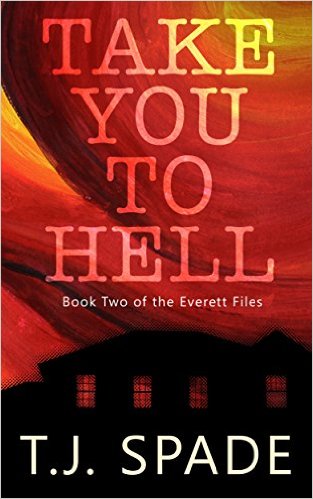 Caleb Everett knows murder. He's seen inside the minds of psychopaths, sociopaths and the deranged, and witnessed crimes of passion, hate, opportunity and revenge. But Caleb Everett isn't a profiler or a cop ... he's a psychic. Teaming up with Homicide Detective Jack Rafferty, he uses his ability to catch murderers before they kill again, and potential murderers before they kill at all.
This time around Caleb has two cases demanding his attention; one perpetrator out for revenge and a serial killer sending sinners to Hell at the flick of a match. And if that isn't enough to deal with, Caleb also has a target on his back. Someone wants his world to unravel and is plucking at the threads. If Caleb succeeds in solving these cases will he be damning himself by saving the innocent?

Half-blushing, Caleb walked beside Jack to the corner bar. Ethan, he realized, really had spared no expense. The bar, stocked with the best of everything, was run by a professional mixologist as well as two bartenders. To Caleb’s chagrin there were even three signature cocktails created specifically for the event – one of which incorporated his name. Jack nearly choked on laughter when the woman beside them pulled up a stool and ordered the ‘Everett Martini – dirty’.
“Ethan has a lot to answer for,” Caleb grunted.
People-watching and with his back against the bar, Jack shrugged. “Actually, this is already a lot more fun than I anticipated.” He placed an over-the-shoulder order for a beer and two glasses of Bollinger.
Caleb ordered soda water but was almost tempted by something harder. It was going to be a long night.
“Don’t look so glum. We’ll take the girls their drinks and you can give us the guided tour of this thing.”
“The installation,” Caleb corrected.
Jack raised an eyebrow. “Yeah, that’s what I said.”
“Caleb!” someone placed a hand on his shoulder and, drink in hand, Caleb spun around to see a familiar, unwelcome face. Plastering on a smile he switched the soda to his left hand and clasped palms with Liam. In a tuxedo and with slicked back hair he looked less Bond and more Godfather.
“Good to see you, Liam.” He nodded to Jack. “Jack Rafferty, this is Liam Sharpe – don’t be misled by the name.”
“Ah, always the joker, eh, Cal?” He brushed invisible lint from the shoulder of Caleb’s jacket. “Have you had time to browse the gallery yet? No? Well, don’t worry, I think my sculpture makes up for the lack of depth in your pieces – I’m sure no-one will notice your usual under-performance.”
Jack took this as his cue to introduce himself; with a show of teeth and a handshake he said, “Liam, good to meet you.” Jack released the bruising grip and made a show of wiping his own palm on a napkin. “You’re rather sweaty. Are you nervous? Maybe you should have a drink – ” he feigned consultation of the menu, “ – you’re the Cosmopolitan. Very sugary but not a lot of substance.” 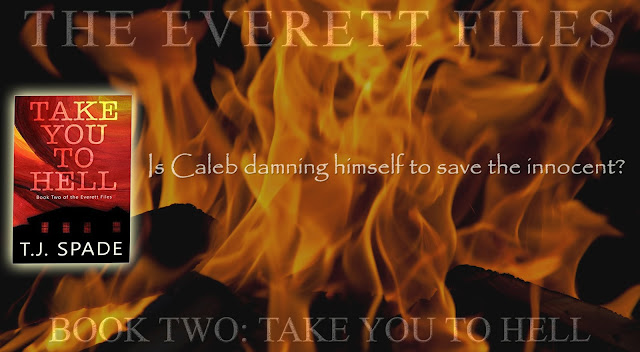 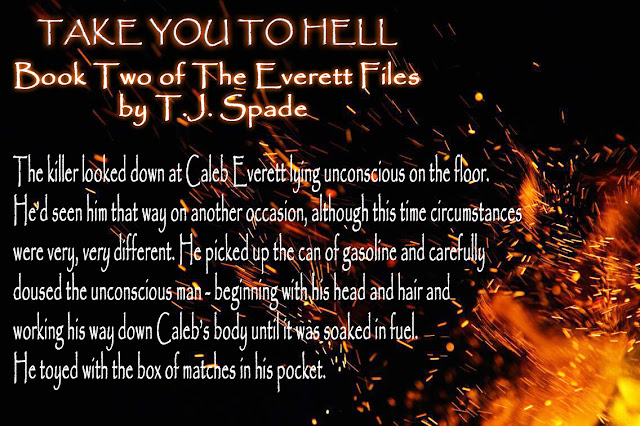 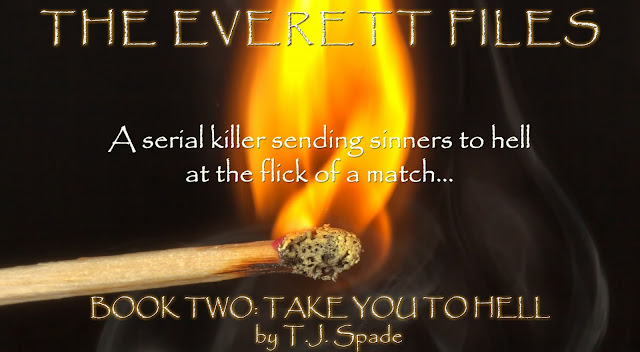 ★REVIEW FROM WITHIN THE PAGES BOOK BLOG★

Take You To Hell is book two in The Everett Files and had me on the edge of my seat while reading. TJ Spade's descriptions of the scenes are incredible. It is like you are right there. I couldn't put the book down. I was left with such a book hangover.....I literally yelled "it can't end here"!

Caleb once again is being targeted in Take You To Hell and when you think you have it figured out you come to find out you are wrong. With his psychic abilities to see into the minds of killers will that help the local police to solve the crimes before more innocent people are hurt? Caleb and Jack embark on a journey to find the killers where friendships and trust are questioned. I don't want to give anything away so definitely pick up your copy today!

Take You To Hell is a definite must read. I can't wait to get my hands on the next book in The Everett Files!

T.J. Spade has two fascinations: Indiana Jones and the macabre. After trying to be Indy for a while and earning a Bachelor’s Degree in Archaeological Practice, T.J is now satisfying interest number two by plotting murder …on paper only of course.

Other Books In Series:

Take You Apart: Book One of the Everett Files 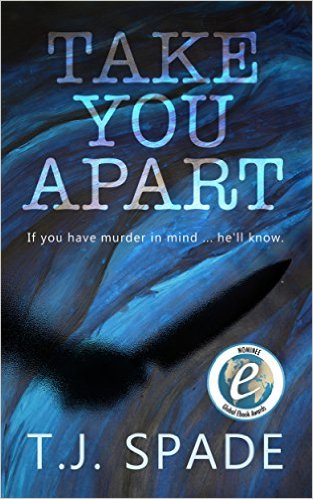 Successful artist Caleb Everett lives each day with a real-time film inside his head, playing … murder. Since he was a child, Caleb has been able to see into the minds of killers. Working alongside veteran Homicide Detective Jack Rafferty, Caleb now uses his unique ability to balance the scales of justice.

With a new case afoot, Caleb is himself being targeted by a killer, and with attractive journalist Makayla Dawson on the scene, it becomes a race against time to save them all. With the odds savagely stacked against them, will this case take apart everything Caleb holds dear?